Established in 1879, the famous North Gregory Hotel has been the community’s beating heart since the beginning. She is, and forever will be Australia’s Queen of the Outback. A tale of strength and resilience

The original ‘Gregory North’, as it was called at the time, burnt down in 1899. It was quickly rebuilt. Tragedy struck the Grand Old Lady again in 1916 when another fire tore it down. But — once again, the hotel was rebuilt. In 1946, tragedy struck the North Gregory yet again, when a third fire swept through it. The council of the day, recognising the importance of the hotel, helped raise the Gregory from the ashes. Construction of the new brick hotel began in 1952, and the present North Gregory Hotel was opened in April 1955. 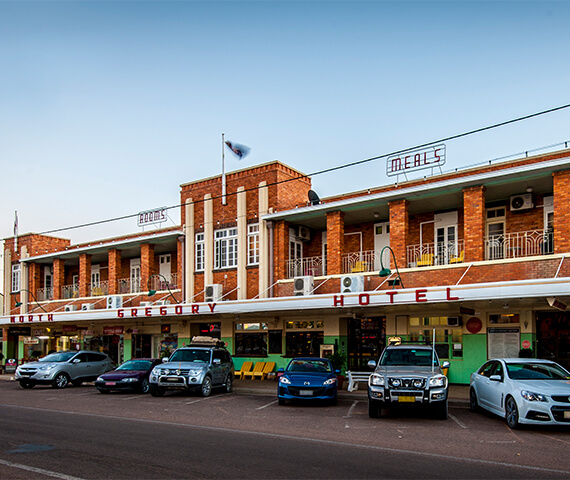 History comes alive at the Gregory

With heritage steeped in her bones, she’s a true Aussie battler, surviving fires, drought, and hardship, the affectionately named Queen of the Outback has a past to be proud of. It was here at the Gregory on April 6, 1895, that Australia’s unofficial national anthem, Waltzing Matilda, was played in public for the first time. During the 1920s, secret meetings took place at the hotel, as Winton locals met to form a small airline called QANTAS. The 36th president of the United States, Lyndon B. Johnson, stayed with us when his plane was forced to land in the Outback during World War 2. 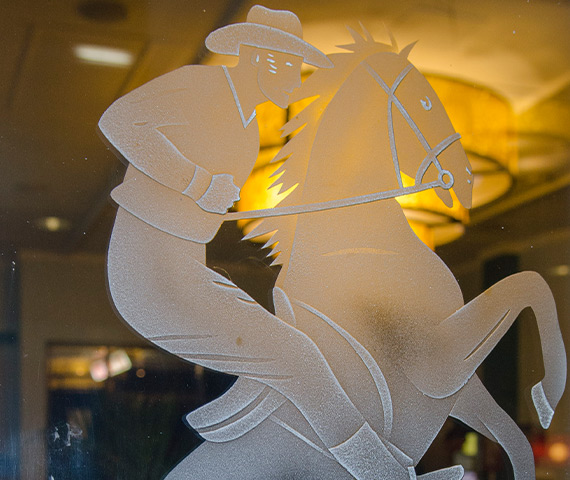 If these walls could talk…

Many have passed through her doors over the years, each leaving their mark in some way on this Queen of the Outback. Her dining room features original etchings by acclaimed artist Daphne Mayo. Don’t forget to keep your eye out for our friendly ghost Edgar Peters. Boy, does the old settler like to joke around. Just never leave out a bottle of Port… We welcome you to come dine with us in the Daphne Mayo Dining Room, Musical Fence Cafe, and Horseshoe Bar. Relax in Banjo’s Beer Garden, gaze up at the stars and share stories. The Gregory is always active, with a large number of events and activities on offer through the season to appeal to guests of all ages. 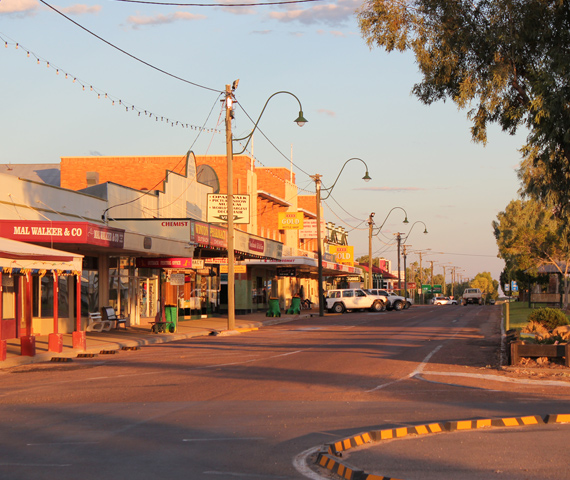 If our fine dining isn’t your cup of tea, that’s alright, because we also have The Horseshoe Bar and Banjo’s Beer Garden. Perfect for sports fans, guests and patrons can catch all of the action on one of our plasma screens. Finally, the Musical Fence Cafe is the perfect place to let your hair down and relax. This chilled, creative atmosphere is open for breakfast, lunch, and takeaway. It also has GREAT coffee! For a standout function, the North Gregory Hotel is the perfect choice. Offering you a range of options for your special occasion. Our superbly versatile venue is well equipped to accommodate an array of events, from a family get together, birthday party or a private celebration. Our team is experienced at designing private functions to suit your individual style and requirements, including breakfasts, dinners, lunches, themed events and product launches. Our outstanding food, wine and first class service and unique setting guarantees your guests will definitely be impressed.

Open for lunch and dinner, enjoy wholesome country fare with a glass of specially selected wine or ale. Enjoy the skilfully-etched sandblasted glass doors created by the room’s namesake.

A relaxed and creative atmosphere that is open for breakfast, lunch and takeaway. Our cafe is the perfect place to unwind with a coffee or tea and put your feet up.

The Horseshoe Bar and adjoining Banjo’s Beer Garden serve only the best beers and cocktails, you can catch a game on one of our plasma screens or just enjoy the authentic Aussie pub atmosphere.

Located in Central Western Queensland, Winton is 180km north-west of Longreach, 470km south-east of Mount Isa and 1,500km from Brisbane. So, it’s just a short hike.

Although it’s in the middle of the Outback, there are plenty of ways to get to Winton. For many, the best way is by car. There is nothing like driving through Big Sky Country, and Winton is accessible via bitumen roads. If you’re travelling from the west and feel adventurous, why not travel along the OUTBACK WAY — Australia’s Longest Shortcut. Whatever way you choose to drive to Winton, it’s essential that you plan ahead and let people know of your route.

Queensland Rail’s Spirit of the Outback rail services run twice-weekly Brisbane to Longreach, with a coach link to Winton.

Our helpful staff at North Gregory Hotel are eager to assist in any way possible. Please get in touch, we look forward to hearing from you.

The Queen of the Outback welcomes you, so relax, unwind and enjoy our refurbished deco rooms or stay under the stars in one of our van sites, we’ll see you soon.